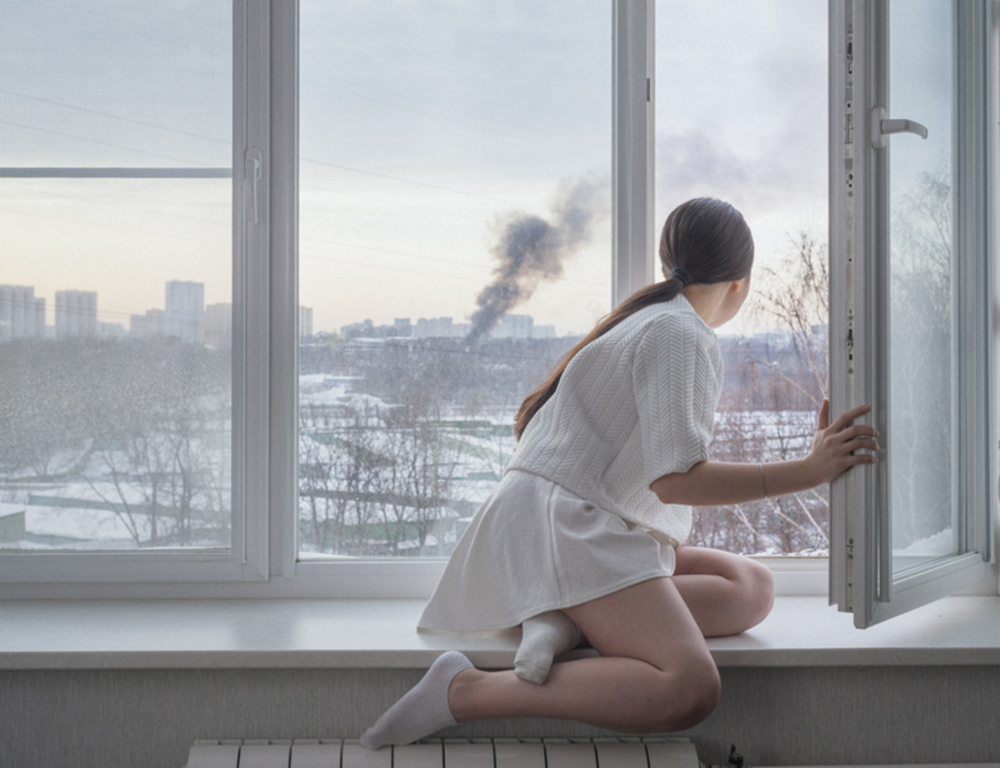 Often in the cinema
I think I hear rain hitting the roof,
as if there was no place
where to take shelter.
Olvido García ValdésHow to place the body in a world full of homes?
How to build an “outside” from the forced inside?
How to talk again about inside / outside?
And what doors to open?
And where is nature?
And our connection to other beings?
Rehome is a photographic exhibition that questions the feelings and challenges of simply coming out of our homes again after lockdown. Reactivating the gaze and how to reoccupy our body.  Photography, as Serge Tisseron says, is a way to approach a physical assimilation of this (new) world. The concept is a result from a cultural dialogue between Spain and Russia for the first Photential presentation curated by Ana Folguera in Madrid and co- curated by Moscow based Kristina Romanova.
Artists: Jorge Fuembuena, Laura C. Vela, Dmitry Lookianov, Lena Tsibizova, Julio Galeote, Anastasia Pozhidaieva, Alejandro Marote.
Starting from the concept of “rehome”, that is, relocation, rebuilding the feeling of intimacy, roots and identity, where we have created a virtual display of three rooms, in which the visitor can experience our photographer’s artwork and other objects. The concept was developed and designed by Iván Lozano and Lola Zoido, creating a parallel world in which to address all questions of the curatorial work.
The immersive exhibition is structured in three parts:
1. My body- everybody. One of the consequences of confinement has been to re-establish a new relationship with our own body. But we have also detected – in an almost “collective choreography” – how the bodies have become disturbingly homogeneous. We have all felt the strangeness of wearing the same clothes as the days went by, looking at details of our own physiognomy, and reflecting on our own physical articulation in the space of our house. There are certain parts of the body or certain everyday gestures that have suddenly been resignified. Have we discovered new ways to inhabit ourselves? This block explores corporeality and even a certain “estrangement” in the face of gestures, textures and actions that have perhaps been re-signified.
To address these questions, we have taken up some of the photographs from Jorge Fuembuena’s ( Zaragoza, Spain 1979)  series Elba and Maya. A very special series about the two girls, goddaughters of the photographer, which he himself has been producing over the years, and which is still in progress today. But what interests us here, more than a documentary approach, is their attitude and almost “choreographic” presence, which make the everyday a space for writing between biological age, chance and spontaneity. Added to this is the fresh and optimistic look of Laura C. Vela (Madrid, Spain, 1993), with some images from her project Como la casa mía, in which she explores the concept of home. Lena Tsibizova (Moscow, Russia, 1988) proposes a humorous look, where the simple act of dressing becomes an almost performative action.

2. My things/everything. Our relationship with objects is in continuous transformation. This is a relationship questioned continuously in contemporary art.  But perhaps in these moments, the “things” that accompany us daily have also been given a new meaning in our lives.  Suddenly they have acquired an aesthetic and autonomous value that went unnoticed when we were not at home for such long periods of time. The photographers reflect on the ability of physical objects acquiring new identities and dissociating themselves from the context where they were normally located or originally perceived. In this section, Lena Tsibizova’s (Moscow, Russia, 1988) almost “povera” still lifes coexist with the almost “surrealist” of Anastasia Pozhidaeva (Moscow, Russia,1989) , and the more metaphysical gaze of Julio Galeote (Madrid, Spain, 1977). In his series Inside / Out, Galeote reflects on objects and the function we attribute to them. What happens if we alter that pre-established order?

3. Lock / unlock. This block poetically explores the notions of opening vs closing. Two concepts that have taken a significant role in our lives this year. These are two concepts that, curiously, have always accompanied the history of photography and the gaze of the photographer. The idea of starting from the “inside” (be it one’s own subjectivity or an intimate space) in contrast to the notion of the “outside”, be it the collective, the street, or the outside world. We could say that this polarity has dissolved even more recently.The striking landscapes of Dmitry Lookianov (Krasnodar, Russia, 1983) and Lena Tsibizova’s gaze towards Nature function as questions or doors between doubt and reality.

The audiovisual piece Fracking, by the artist Alejandro Marote (Madrid, Spain, 1978), compliments this vision of our “new” relationship with the world. In this renewed dependence we have on screens and digital images, the piece explores the almost “ontological” possibilities of the visual to help the contemporary image free itself from its own digital prison.

More exhibitions
We use cookies on our website to give you the most relevant experience by remembering your preferences and repeat visits. By clicking “Accept All”, you consent to the use of ALL the cookies. However, you may visit "Cookie Settings" to provide a controlled consent.
Cookie SettingsAccept All
Manage consent