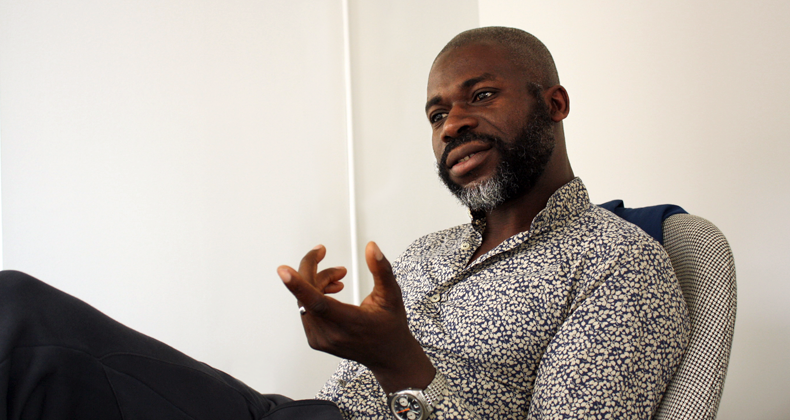 My background is one that only a small cohort of individuals know nostalgically in a linear or sequential form. It is based on extraordinary relationships forged with people who trusted me to participant in various significant creative and cultural events all within the medium of photography. My early beginnings as a music photographer for major record companies lead to a period working with music artists in Los Angeles. At the height of working within the music industry, I received a major commission to produce an editorial shoot that triggered a return to London to open a studio predominately towards the fashion industry and fashion magazines. In 2000, again witnessed another shift, this time from fashion into contemporary art through launching Next Level magazine. Along with Jimo Salako, we used the magazine to examine the extent to which the 2000’s could be a turning point for black identity to produce one of Europe’s if not the world’s leading art photography publication. Let’s trust the history books will recognise our impact.

Soon after Next Level’s rise in popularity, I was invited to Sweden where my curatorial work found a footing. During the research trip I aimed to trace Afro-European’s “Blue-Men”. However, during a segue moment, I came across Pontus Hultén and Willem Sandberg who showed great examples of how the museum curator can actually determine the role of the museum, in my case, allowing spaces to be an incubator or laboratory. This led me to new ideas and discourses within the medium of photography I work within today.

What is defining is the merger of the carriers of knowledge and guardians of culture where artists become curators and curators become artists. This hybrid of roles illustrates the multifaceted structure adopted that is being shaped by our beliefs into what drives our cultural voices. The near future will be an interesting paradigm shift.

Social movements over the past year has woke people’s consciousness and presented an influential cast on everything we do. From the perspective of visual culture, social movements have become the beacon of theory and critical rationale. It is intriguing that sub-culture has become popular culture in the cycle once again. My fear is that it is simply fashioned as many of the topics which have surfaced have been topics lobbied for generations and to only offer a year or two of exposure in exchange for a lifetime of work would be a travesty.

We are now in a phase of a worldwide phenomenon, this is inevitable. How do we return to a potential for the art institutions as a social arbiter? With prosperity and air travel, we have the potential as people to spend time together more freely, which is positive. As a result of the pandemic we rely upon, and in some cases, are dependent on the internet to feed our digital avatar. We have the potential negative of a lot of ill-informed people who have self-serving opinions, often not based on fact. On the other hand, there is the possibility of widespread independent voices and involvement, which is positive.

This question addresses the materiality usage which occurs. If we refer to the past 10 years then this is the full circle shift back to analogue from digital within the arts which, is not a new observation however, what is the fascinating angle appears to be the re-examining of material differences that exist. The ideas that shape our realisation of technical methods within the working procedures and how we as the audience expect to receive them is the coupling of a systematic interplay between digital and analogue.

Change has taken place, this is a cycle of advancement and adaptability, no question. A cause and effect or the elephant in the room is the art market, without air travel the art market will relinquish control while new systems such as NFT become direct mechanisms for artists to circumvent the middle-man, the art market.

The curator role especially played a pervasive and pivotal role in the dramatic transformations in artistic production, reception, and distribution. This has shifted to acts of protest and disruption. ArtReview pointed to this in their edition “Why Curators Should Learn From Protests. The role of the curator is an acutely active position creating a narrative through the artwork. Protesting Storytelling pushes the boundaries because so much of what is going on is not to be seen in the galleries.

There are many artists whom I have come across. However, what is key is what I have to voice artistically. There are usual art market formulas in which everyone follows, such as finding or launching the career of artists. As I stated it is about what I invariably voice and which artists in whichever stage of their careers able to further my storytelling.

I am utilising the publication to explore it as a medium in its own right. I will investigate the distinct materiality of the publication as well as its unique properties in an art context. Embracing publications sculpturally which up to now have been only marginally important.

More articles
We use cookies on our website to give you the most relevant experience by remembering your preferences and repeat visits. By clicking “Accept All”, you consent to the use of ALL the cookies. However, you may visit "Cookie Settings" to provide a controlled consent.
Cookie SettingsAccept All
Manage consent